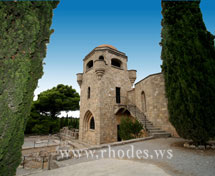 The general area of Ialisos, in the northern part of the island, has been inhabited since the pre-historic age. In the neighbouring village of Trianta have been discovered ruins of a Minoan settlement as well as Mycenaean graveyards in the surrounding hills that date back to the period between 1700 and 1400 B.C. The ancient town of Ialisos spreads around the hill of Filerimos, where its acropolis is located filled with monuments of the ancient, the Byzantine and the knight’s period, such as the temple of Athena Polias that dates back to the 3rd or 2nd century B.C. Various findings, notably the flooring and some crown tiles made of clay, have been estimated to date back to the 5th century BC, a fact which indicates that there used to be a previous temple throughout the classic antiquity, whose place was occupied by the temple of Athena. Today, inside the Dorian-style temple remains the holder of the statue of Athena and some pillars along with a few apothetes (a pit in which sacred objects were deposited, which for some reason were no longer in use), where various figurines, pieces of earthenware and metallic objects were discovered. In the spot were also found inscriptions mentioning that the temple besides the worshiping of goddess Athena was also dedicated to the worshiping of Zeus Polieus. Later on, a Christian temple was built on the spot during the 5th to 6th century. During the early years of Christianity (5th – 6th century A.D.) and the period of the Franks’ rule the spot is occupied by a medieval monastery and a church.

In the archaeological site of Ialisos there is also a Dorian drinking fountain of the 4th century B.C., with its fount carved on the rock and its outflow having the shape of a lion’s head. The fountain used to be filled from two ridges carrying water from the top of the hill. The drinking fountain was reinstated from the Italian Archaeological School during the period of the Italian rule of the island. Still standing, there is also a temple of the knights’ period with it two chapels, dating back to the 14th century and a baptistery of the Christian temple, all built over the ancient temple of Athena. Eastern of the hill there are the ruins of the Byzantine entrenching walls, that had been repaired by the Knights. Moreover there were some monasteries operating in the same spot from time to time, particularly a Byzantine catholic monastery in the end of the 10th century and a reinstated medieval monastery during the years of the Italian rule. In the area you can also visit the chapel of Agios Georgios Hostou of the 15th century, where you can admire some excellent wall paintings.